Becoming organized in your country, State, province, region, county, city and town is essential !! Here is the Russian model... 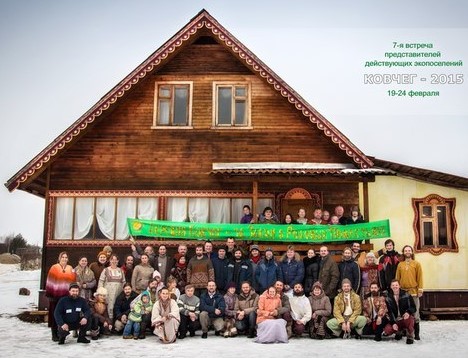 February 20-24, 2015. A meeting of representatives of the active settlements of ancestral estates in the PRP "The Ark", Kaluga region, in which the head of the Federal Coordination Council Alexander Samokhin took part.

The purpose of the meeting: the search for solutions to "insoluble" issues at the levels of the estate, the settlement, the surrounding world. Working title of the meeting:

"Settlements of ancestral estates: From becoming to prosperity and their continuity".

Note: The Motherland Party also translates as the "Relation Party" or the "Native Party".

Short description
There were invited 1-2 representatives from each settlement from the number of permanently living and actively participating in public projects, in which at least 8-10 families are wintering. The meeting was arranged in a format of common circles, where each one in turn expressed his thoughts / suggestions on a given topic. At the same time there were discussions of several topics in different audiences, each of the groups prepared the report for all the other participants of the meeting following the results of the discussion.

At the meeting there were representatives of settlements from the Vladimir, Pskov, Arkhangelsk, Vologda, Kirov, Ryazan, Tula, Nizhny Novgorod, Leningrad, Kaluga, Smolensk, Yaroslavl and Moscow regions, Krasnodar Territory, Belarus, and a representative of the administration of the Belgorod region.


During the meeting the following issues were considered:

1) Experience in the implementation of the law "On the Ancestral Manors in the Belgorod Region".
2) Financial well-being in the Ancestral Manors, self-sufficiency.
3) Organization of the process of family education.
4) Long-term planning in the settlement. Preservation and development in the settlements of ideas set forth in the books by VN. Megre.
5) The formation of a socialized image of the settlement of the Ancestral Estates.
6) Forms of effective interaction and options for resolving conflicts in settlements.
7) Borders of public and personal interests. How can this be reflected in the law on patrimonial estates.
8) Continuity of generations in the settlement of the Ancestral Estates.
9) How to keep in families love. Preserving and multiplying the energy of Love in the Family Estate.
10) Native Party: the interaction of residents of settlements of ancestral estates with legislative and executive bodies of state power in the region.
And much more.

When discussing the issue "The Native Party: the interaction of the inhabitants of the settlements of clan estates with the legislative and executive bodies of state power in the region", various options for interaction of settlements with public authorities at various levels were examined in the circle. The parties discussed the possibilities of the party as a tool for resolving settler issues.

The goals and objectives of the party, the work plan, recommendations for building effective work, intermediate results of the party's work were voiced. In the course of the discussion of the issues, it became obvious that the law "On patrimonial estates" is a small part of the legal field that will need to be created. It is necessary to prepare a comprehensive package of documents in many areas: on family policy, education, health, economic development and so on.

In the process of work, a mechanism was defined for communicating information about the needs of the inhabitants of settlements of clan estates to state structures. This mechanism consists in the joint work of Party lawyers and initiative residents of settlements offering changes or additions to the current legislation, based on the practice of life on earth.


How do you start to get organised with people in your region?
Here are some starting points >>

International Directory - this keeps expanding as I find more contacts and add links
Connect on Facebook by country
Operating guidelines of Facebook groups and other networks for your country
at May 01, 2017